Welcome to the May 2022 edition of Garrington’s UK property market review.

Despite market conditions remaining brisk over the last month, a shadow of uncertainty has been cast across the market by downbeat economic forecasts and data published over recent weeks. There are early signs that a more bearish economic outlook is starting to influence market activity.

At a headline level, the property market would seemingly appear detached from wider economic pressures.

House prices have continued to rise over the last month, with both Nationwide and Halifax still recording double digit levels of annual growth. 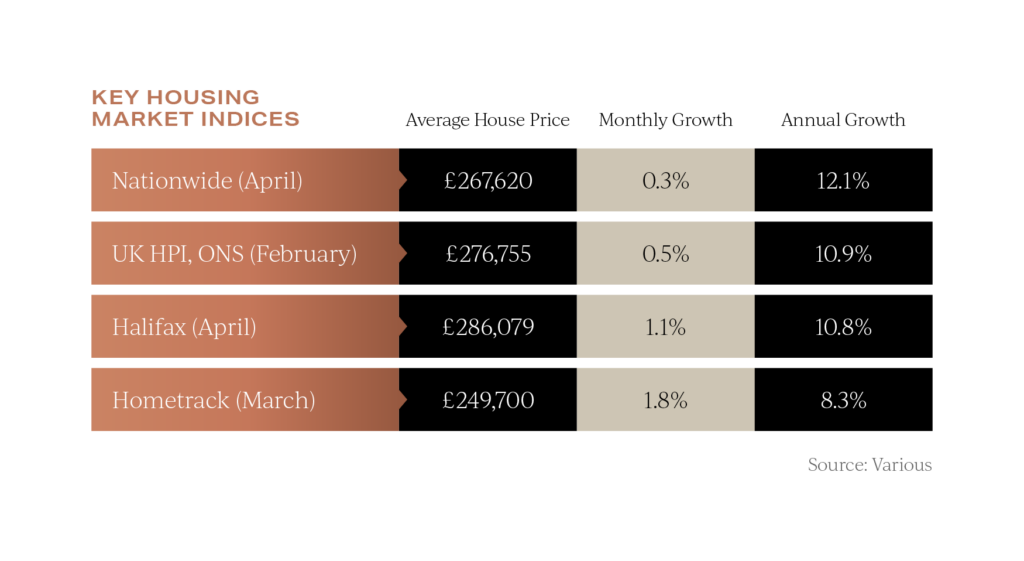 This is despite a further quarter of one percent rise in the base rate by the Bank of England. Many mortgage rates have risen as a result, and ordinarily the doubling of a base rate in just 3 months would have impacted the market significantly.

However, the much publicised supply and demand imbalance continues to underpin values.

The extent of the disparity is illustrated in this chart. 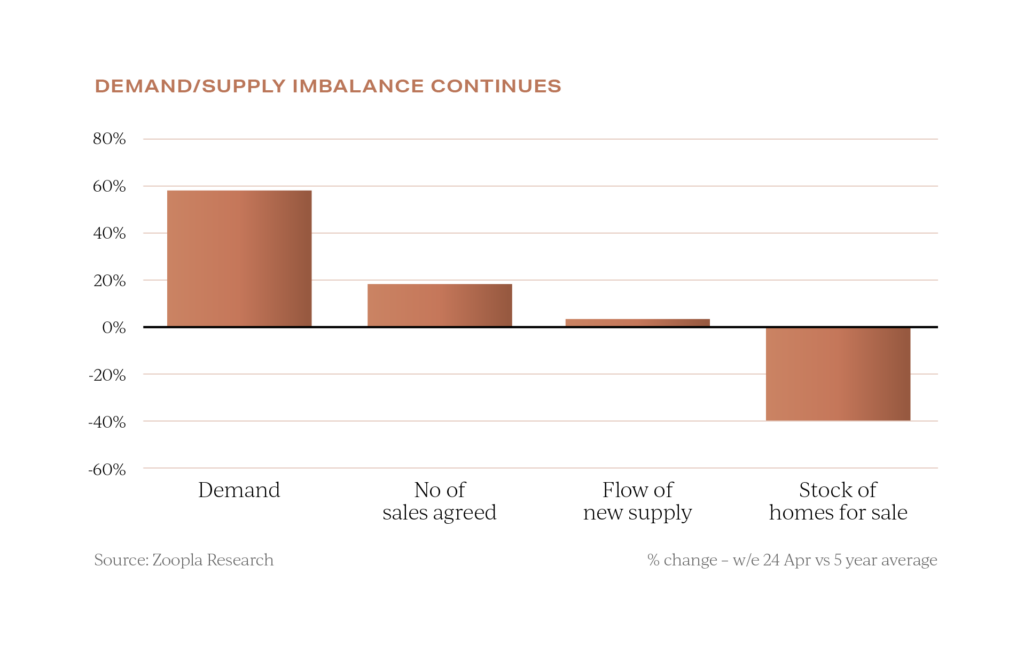 Whilst there have been reports of slightly improving rates of more property being placed for sale, this is only a mere 3% increase over the 5-year average.

Across Garrington’s operating areas we are seeing movers adopting a more wary approach to the market, fuelled by concerns about overpaying for a home. Despite this, those already in the market largely remain committed to their moving plans.

After lagging behind the rest of the UK for some time, activity in the London market has increased.

This is being driven through a combination of travel corridors opening once again for international buyers, domestic purchasers sensing that relative ‘value for money’ may be at its optimal point and, as seen in other parts of the UK, the supply of property for sale remaining constrained.

There has also been a noticeable increase in buyers looking for London pied-a-teres, with the need for more time to be spent at the office.

The sale prices achieved on property transactions across prime London were 5% higher last month than at the same time last year. Sales volumes are 4.6% higher than pre-pandemic levels according to LonRes. A closer look at this data also reveals that house prices have risen by 6.1% since April 2020, whereas the average value of flats has fallen by 0.9%.

Transaction volumes of flats remain 27% lower than the pre-pandemic peak and in contrast house sales were broadly aligned with their past peak in 2014. 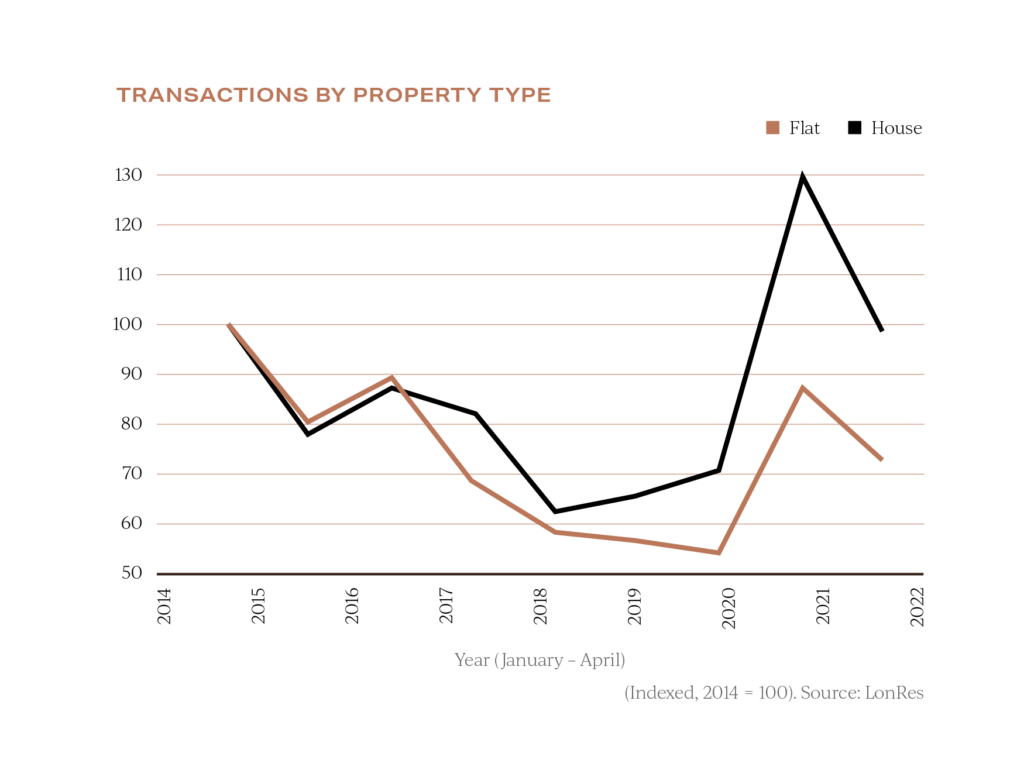 Supported by the lack of stock, houses are now taking on average 7 months to sell in London. Flats, however, are taking longer, with the average time now 9 months. 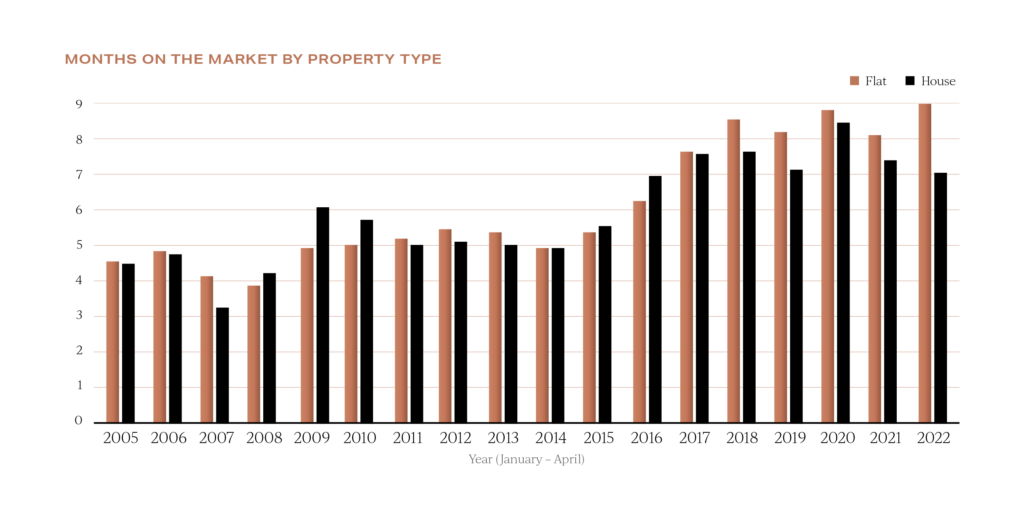 If market dynamics and the wider economy continue to shift over the coming months, London might stand to benefit from a flight of equity from movers and investors alike, seeking what they consider to be a ‘safe harbour’ to weather any economic storm and act as a hedge against inflation.

Activity in the rental market has mirrored that seen in the sales market; fast paced and competitive, with over 52% of RICS members reporting an increase in demand last month and new listings falling by 7%.

With the prospect of rising rents and interest rates, more movers are assessing all options.

For a buyer with a 25% deposit, the monthly mortgage payment in all areas of the country remains lower than the equivalent monthly rent for a 2-bed flat based on a 2-year fixed rate mortgage.

However, for those with a 10% deposit, increased mortgage rates mean that in London, the monthly rent would be 9% less than mortgage payments, and there is now virtually no difference in the South West, the South East and East.

The rental sector is currently never far from the headlines. During last week’s Queens Speech, announcements were made confirming the Government’s intention to abolish no fault evictions and the creation of an official ‘private rental property portal’ detailing the address of every rental property, landlord and where applicable, the letting agent.

Registration is expected to be conditional on being subscribed to an Ombudsman property redress scheme. Speculation is mounting that this could be the catalyst for further landlords exiting the market, thus in turn reducing rental stock levels further.

The average rent in the UK at the end last month was up 9.5% on the same time last year and up 1.2% from March. 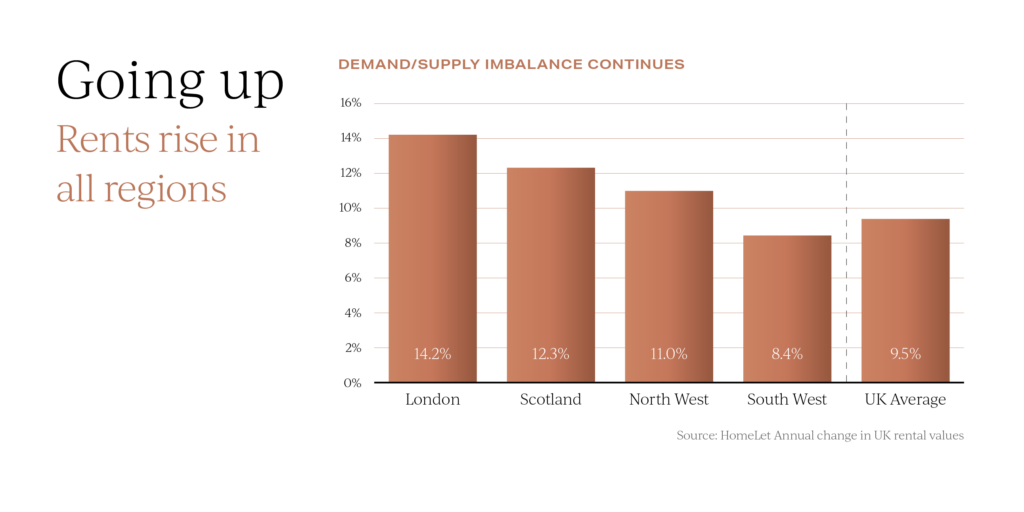 Positive annual and monthly changes in rental prices have been recorded in every region. London has seen the highest annual increases at 14.2%. After London, the highest recorded annual rises are in Scotland at 12.3%, the North West at 11% and the South West at 8.4%.

Dwindling stock levels will not be good news for tenants, as higher rents would then seem likely, and would be an unintended consequence of professionalising this sector of the property market.

When the Governor of the Bank of England makes statements referencing a ‘grim economic outlook’ it becomes hard to imagine that the property market can remain completely sheltered.

Average property prices are currently rising fastest in the most affordable of locations in the UK, but it is possible that this may soon change. 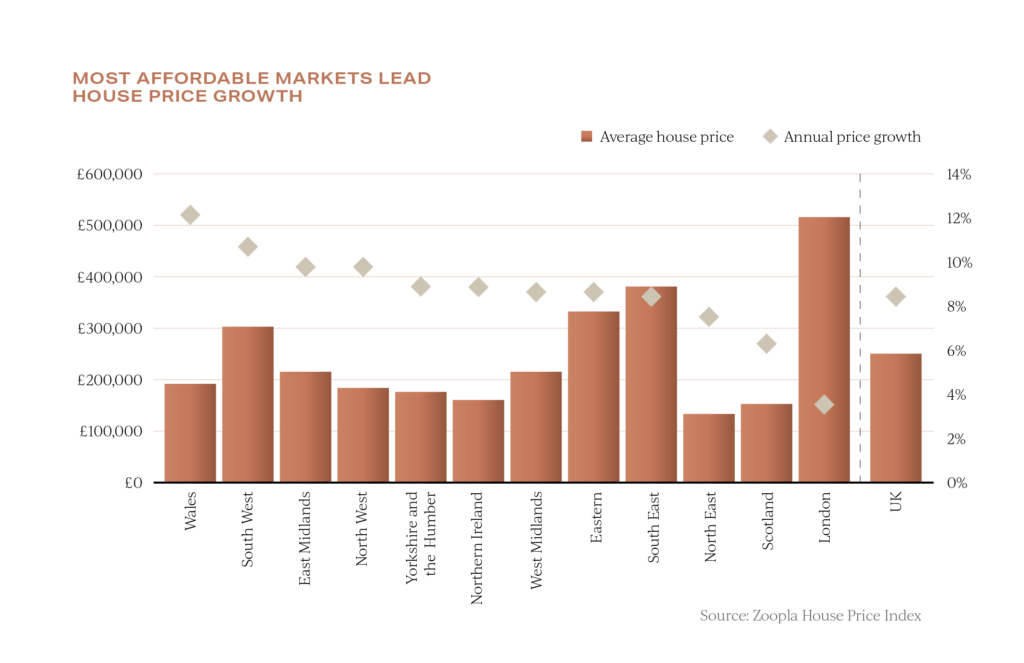 Many of the forward indicators, together with the erosion of confidence levels we have mentioned in this update, are likely to manifest themselves into price and transaction trends over the coming months. Whilst there is no suggestion of a crash, the descent to a ‘soft landing’ may have just begun.

We hope you found our latest update helpful. In the meantime, if you would like to discuss your own property plans, please feel free to get in touch using the contact details below.