Activity in the market has remained tentative over the autumn months but further price growth in national average values has defied forecasts. There has also been an unseasonal pick up in housing transaction volumes recorded by several indices. This late run of sales is thought to be a consequence of many households postponing moving plans earlier in the year due to the General Election.

Both Nationwide and Halifax have recorded a rise in average property prices; not only for last month but also for the last quarter. However, there remains an underlying trend that these rates of growth are significantly lower than this time last year. This pattern is uniform across all major UK cities according to Hometrack, and of note is that five of these cities – Aberdeen, Cambridge, Oxford, London and Cardiff – all now have growth rates below the rate of consumer price inflation.

The Chancellor presented his Budget to the nation last week which predictably has provoked mixed responses. Whilst housing was meant to make all the headlines, there was no escaping the unexpectedly pessimistic OBR forecasts revealed by Mr Hammond; that this year’s UK growth forecast has been downgraded by 25% to 1.5% and that growth will drop to 1.3% in 2020 before rising again thereafter. These revised forecasts make it more challenging for the Chancellor to eliminate the deficit and address lower wage growth.

Despite these downgraded forecasts, the Chancellor announced a raft of measures to address Britain’s housing crisis with the Treasury allocating £44 billion to support schemes over the next five years.

Central to the measures is increasing the supply of new homes in the market and a pledge to build on average 300,000 homes a year by 2025. Whilst this is welcome news, many are sceptical as to whether it’s a pledge that will be delivered. The Barker Report highlighted 10 years ago that 250,000 homes needed to be built a year to keep pace with demand, but since then this number of homes has never been achieved.

Wrong end of the telescope?

There are very few people who would disagree that Britain clearly needs to build many more homes to keep up with future demand. But the Chancellor’s excessive focus on this small part of the housing shortage arguably misses the bigger, and more immediate, picture.

Housing data has consistently reported over the last 18 months that the supply of property for sale is at historically low levels, thus underpinning or increasing average prices. The root cause of this phenomena is frequently cited as affordability, and the cash required for the costs of moving home.

While good news for first-time buyers, this will further squeeze investors in the sub-£500,000 market who are already suffering from increased taxes. What’s more, it does not give any encouragement to owners higher up the chain to downsize. Those wanting to upsize because of growing families – so called ‘second steppers’ – on average pay £8,000 in Stamp Duty Land Tax to move up the ladder, rising to £23,000 in London.

The combination of high rates of Stamp Duty and falling real wages mean affordability is becoming a barrier for even more would-be buyers. Logically, there’s no point opening the floodgates at the bottom of the market if at the higher levels there remains a dam caused by punitive levels of Stamp Duty, and a broken demand and supply dynamic.

Whilst Christmas may have come early for first time buyers, in other sectors of the market this is not the case, and the short to medium term outlook remains distinctly mixed.

At the top end of the market the stock of prime homes is largely split into two categories of sellers; those who have aggressively priced their homes to tempt buyers and discretionary sellers, who are only prepared to sell for what they consider to be a top price.

With the latest RICS Residential Market Survey recording over two thirds of respondents seeing agreed sale values below asking prices for prime homes, it comes as no surprise that across London and the regional markets we serve, Garrington has seen a noticeable increase in off-market opportunities. In some cases, over 60% of the suitable prime homes we are viewing for clients are being sold off-market.

Across the market as a whole, those sellers who have already listed their homes for sale seem to be taking heed of the changing dynamics. According to Rightmove, over one-third (37%) of properties for sale have reduced their asking price since being first listed. This is the highest proportion at this time of year for five years, and new listing asking prices are also 0.86% lower too.

Looking ahead, the market will undoubtedly remain price sensitive over the winter months. The prerequisites for making a successful move will be a pragmatic approach to values, and the latest information to make clear and confident moving plans. 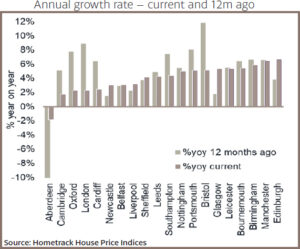 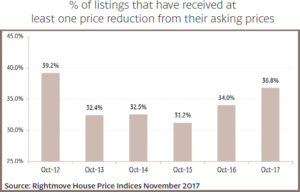