We commented last month on the fractured state of the market which, if anything, has become further polarised over recent weeks as we enter the autumn period. There are significant divergences in market conditions in different price bands and regions, although common to the whole market is an overriding sense of caution and price sensitivity.

At a national level, last month’s price indices confirmed the further improvement in average house price movements. Overall, average prices are still rising on an annualised basis, which according to Nationwide now stands at 4% in September, up from 2.6% in August.

What is driving market conditions?

Whilst many factors affect the property market, so far this year affordability and value for money are key themes shaping the vibrancy of individual markets. Locations that have experienced sustained house price inflation beyond wage inflation are predominately the locations now slowing the fastest whilst, conversely, more affordable locations are enjoying renewed purchaser demand.

The gap between the least and most affordable parts of Britain has doubled over the last decade, with housing affordability having fallen across all of London’s 32 boroughs. However, homes across more than half of the UK are more affordable now than before the financial crisis according to new research by the Yorkshire Building Society which analysed changes in local house prices and earnings from 2007.

The above factors are contributing to the ‘flight of equity’ we are seeing from London and some wealthier regions, as some buyers find themselves priced out, or simply wish to switch lifestyles and property types. According to the Office for National Statistics, over 1.4 million people moved between different local authorities last year.

London – beyond the headlines…

Following a fresh wave of data on falling London property prices, media attention surrounding the state of the market has been relentless. Whilst average data may be accurate, it has limited value. In reality, the London market is far more complex than virtually anywhere else in the UK and accordingly, sweeping generalisations are rarely helpful for obtaining a true understanding of what’s really happening.

All the above underlines just how important it is to have a clear picture of true market conditions in specific locations, and why average data cannot be over relied upon in a rapidly changing market.

Banking on the Budget

Looking ahead, the coming weeks could have a profound effect on how the property market will perform for the rest of this year and into 2018.

The latest Consumer Price Index has now climbed to 3% – marking the highest rate of inflation since April 2012, and eroding consumer spending power and the value of savings. City analysts are now strongly tipping the Bank of England to increase the base rate at the start of November.

At this stage it is too early to predict whether this would damage the property market, or might spur some would-be buyers into bringing forward their moving plans, to lock into the current fixed mortgage rates in anticipation of further increases in borrowing rates.

All eyes will be on the Chancellor on 22nd November as he presents his Budget to the nation. Ironically, with it being two days before the retail bonanza of ‘Black Friday’, there is mounting pressure on Mr Hammond to offer the equivalent ‘Black Wednesday’ with ‘crowd pleasing offers’ to restore dented faith in the government.

Opinions remain divided in the property sector as to whether revisions to Stamp Duty Land Tax (SDLT) will be forthcoming. In a league of its own, ahead of Brexit, the Election result and inflation concerns, Garrington considers SDLT rates the number one issue inhibiting the market, particularly in the prime sector – where charges now vary from eye watering to plain absurd. However, the impact of Brexit is also a negative influence on the market at present with concerns about the economic consequences of a ‘hard exit’ if agreement cannot be reached with EU leaders.

If there are any reforms to SDLT, it is speculated that these will be linked to a property’s energy efficiency rating or will be specifically targeted to favour first time buyers.

Given the nation’s ongoing financial deficit, it looks unlikely that the Chancellor will repeal his decision to apply a 3% surcharge to investor and second home owners. Almost one fifth of residential transactions across England and Wales in the 2016/17 financial year incurred the additional surcharge for multiple property owners. These sales netted the Government an additional £1.71 billion (39% of total SDLT receipts). However, the total value of the extra tax paid varied considerably. Almost a third (31%) of the surcharge payments came from London buyers with a further 19% collected from the South East.

We live in interesting times and for anyone looking to move home or acquire a further property, the lingering question of ‘is now the right time’ has no clear and obvious answer. On many occasions, it can be, but the reliance on clear information tailored to your circumstances is prerequisite to making well informed purchasing decisions this autumn. 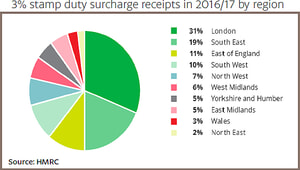 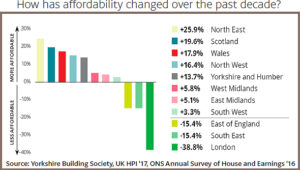