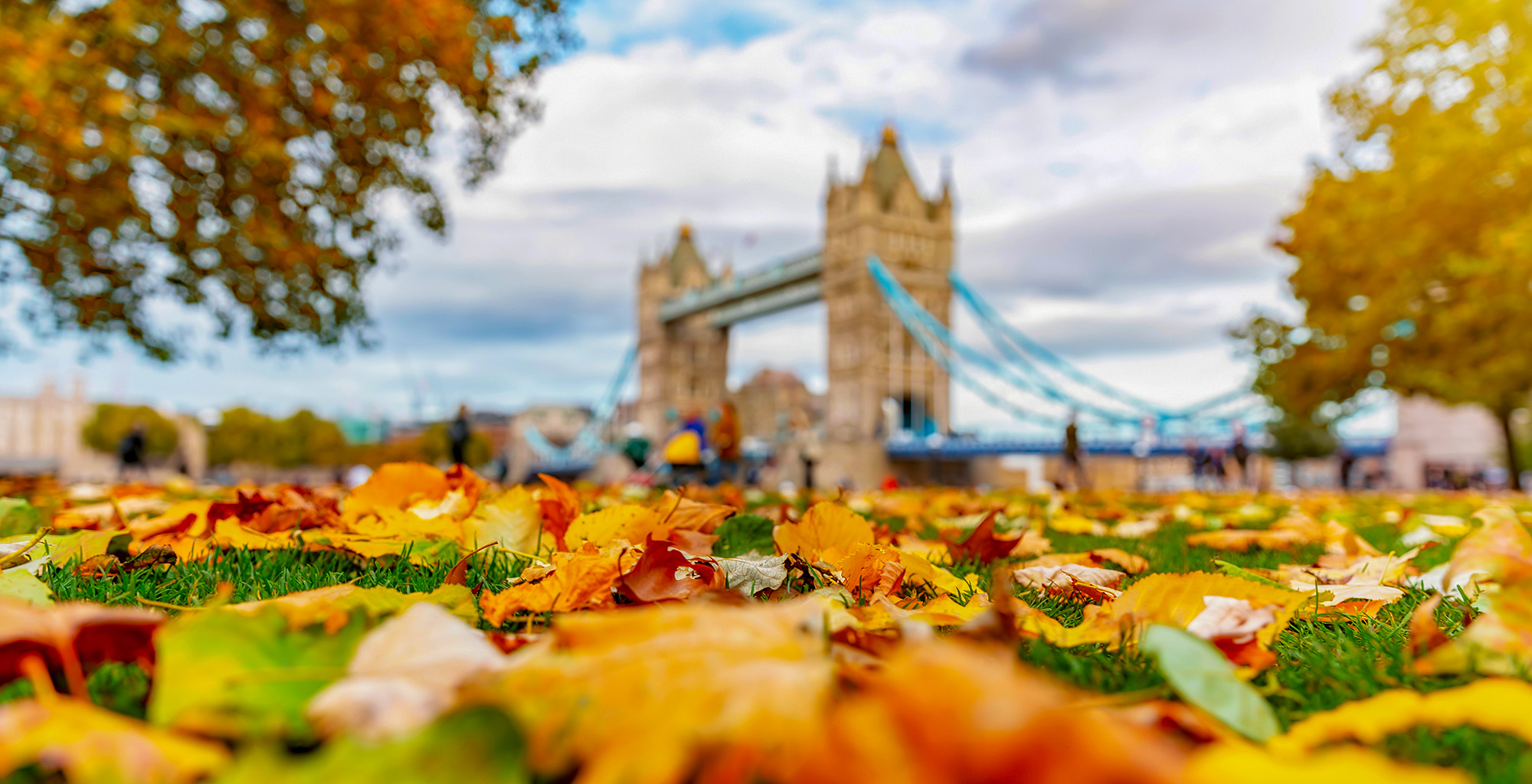 Much like the weather over the last month, the property market has become increasingly unpredictable. The key issue affecting all sectors of the market, is the uncertainty being caused by Brexit and talk of a General Election.

As we reported last month, some buyers are seeing this as an opportunity to secure compelling discounts, whilst others are adopting a ‘wait and see’ strategy.

Growing apathy in the market is reflected in the latest national house price indices. Both Halifax and Nationwide have reported modest monthly falls in average house prices, but of note is that Nationwide is recording the annual rate of growth at a mere 0.2% and Halifax at 1.1%.

At a national level, property prices are now growing at their slowest rate for six and a half years as both sellers and buyers recalibrate and try to second-guess what might be coming next – for house prices and the economy as a whole.

Making sense of a confused market

At a headline level, the news of near flatlining prices will be a cause for concern for some people. In reality, what we are seeing is an increasingly fractured market by price sector, affordability and location.

Data from Hometrack provides useful insights into such market dynamics, underlining the relative affordability of certain parts of the UK such as Manchester and Edinburgh, where market conditions remain brisk and rates of annual price growth exceed the national average. 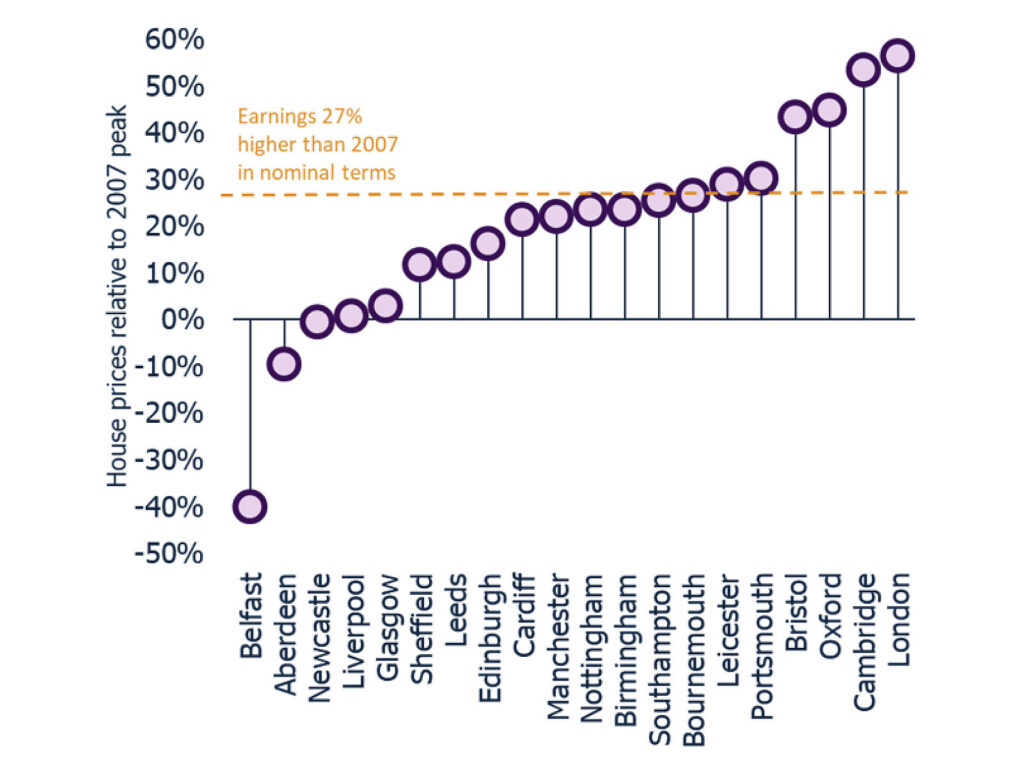 In locations such as Cambridge, Bristol and Oxford where average values are now 40% above their 2007 peak, there is heightened price sensitivity and weaker market conditions. As a consequence, these locations are seeing stagnant or falling prices which is causing a drag effect on national averages.

Despite this and all the uncertainty, the market continues to be active in pockets where buyers detect strong value – especially prime locations in London and the South East, where prices have fallen sharply, and sellers are regularly being forced to accept offers way below their original guide price.

At £8.32 billion, Treasury coffers netted £750 million less in residential SDLT (Stamp Duty Land Tax) receipts across England in the financial year to the end of April, compared to 2017/18. All regions witnessed a fall in receipts except for the East and West Midlands. The London market accounts for over half the fall where historically high levels of tax have been generated. Receipts are down by more than 10% over the year, the equivalent to £380 million. 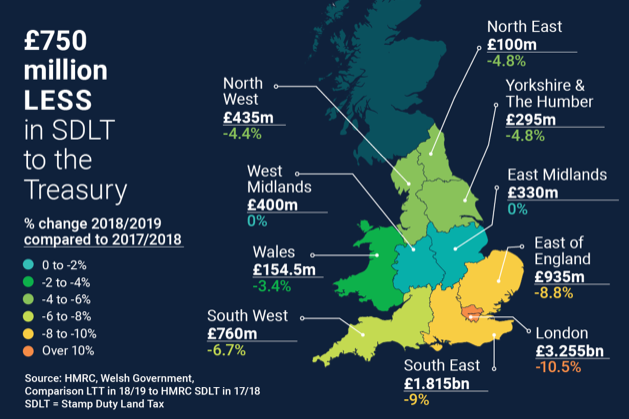 The loss in SDLT revenue is surprising based on there being just 16,000 fewer transactions taking place across the country. The number of sales remain low across prime central London. There have been close to 1,800 sales over the last year which is 28% below average transaction volumes over the last 5 years.

Aside from Brexit, one news story never far away from headlines over the last month has been climate change.

With the arrival of autumn, in households up and down the country the conversation will soon turn to ‘is it cold enough yet to turn the heating on?’ Over recent years, Garrington has seen a real change in homeowner attitudes from ‘awareness’ to ‘action’ when it comes to embracing the benefits of energy efficiency in their homes and reducing carbon emissions.

Across England and Wales, 17% of homes sold over the past year have achieved the top Energy Performance Certificate (EPC) rating of A or B. This compares to 40% of properties that have sold with an energy performance rating of D. 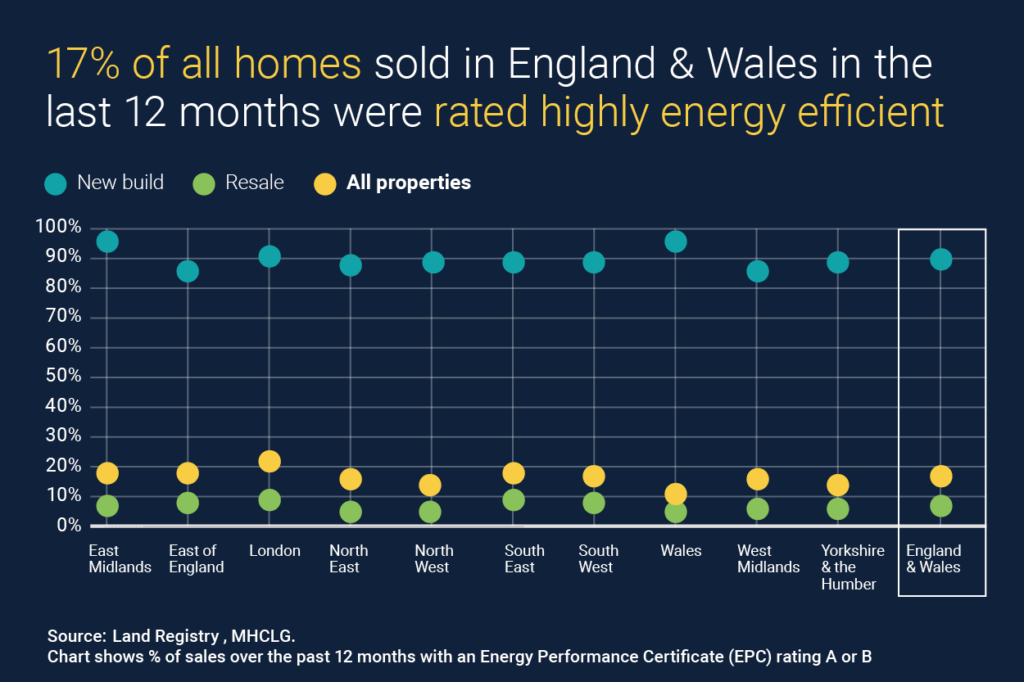 With energy efficiency a requirement in the building of new build homes, nine in every ten new build properties hit the grade, while the figure is just one in 14 for resale properties.

Another environmental issue that buyers are taking closer note of is pollution levels. Last month the National Association of Estate Agents urged its members to tell buyers about air pollution. A new website called addresspollution.org has launched which now details air pollution by postcode in London, with plans to make this data national.

Given growing public awareness and concerns, the environmental credentials of a property will increasingly affect its open market value and saleability. Already in the resale market, properties that are energy rated A or B have achieved a 10% price premium over those rated D – equivalent to almost £28,000 on average values.

Trying to forecast with any accuracy beyond the 31st October is impossible at this juncture given the variables. What is clear though, is that regardless of which direction Brexit takes the country next, uncertainty is likely to be an ongoing theme.

Such market conditions will create further threats for some sectors of the market, yet opportunities for some groups of well informed buyers.

In the meantime, thank you for reading this edition and as ever, please do get in touch if we can help with any property related matter.