How is the country doing for housebuilding at the moment? Well, it’s good news. There’s been a rise in new build homes starts and completions that is bringing the country back towards pre-2008 financial crisis levels according to new build homes UK statistics.

You can see the England and Wales statistics on new build homes in the chart. The same chart where you can also immediately see a clear fall since the 1970s, despite the occasional rallies. It looks like we are on one of those rallies now and the question is, could this be the start of a new upward trend? Or is it more a blip on the radar?

Over the last 50 years the average for starts and completions of new build homes is 190,000. That has declined steadily with noticeable drops around recognisable events, such as the 2008 financial crisis. At that point, starts were at 93,000 a year, and completions at 113,000, showing the lowest numbers.

So how many new build homes are being built now? In 2015/16 the starts and completions were in line at 150,000, meaning they were below the 190,000 long-run average by over 20%. They haven’t recovered the levels from before the global financial crisis but show a good improvement nonetheless.

There’s help for buyers with schemes like Help to Buy but there’s also construction industry help too. Government initiatives during this time include the Starter Homes Fund, Housing Zones and Get Britain Building, all trying to stimulate the building industry and the construction of more new build homes with billions of pounds of investment.

The focus is on accelerating the building of new homes to alleviate the housing shortage and stimulate the building industry. That’s done by sourcing new land, acquiring and de-risking that land, identifying areas for redevelopment and loan financing offers, in order to build new homes. The Starter Homes Fund is a £1.2 billion allocation, Housing Zones in London have £600,000 funding and the Get Britain Building package is backed by £3 billion.

The construction industry is also a huge employer across many different trades so these initiatives create many thousands of jobs. Within the funding there are targets for numbers of affordable new build homes as well as regeneration, improved local infrastructure and new community facilities.

Who is providing these new build homes?

In the same 2015/16 period over 124,000 starts were from private enterprise, over 23,000 by housing associations and 1,500 by local authorities. So we can see the massive proportion of new build homes coming from private companies. The housing association figures show the most fluctuation over the period, as well as in previous years, according to government figures (PDF).

But despite the increases in new build homes the government targets on housing are not being met and supply falls far behind demand. Everyone agrees that more new build homes are necessary though some developments still face delays from the “not in my back yard” NIMBY fallout.

So it’s time to crack out the crystal ball. What might we see in future new build homes UK statistics? The construction industry is likely to be hit hard by a Brexit-related loss of workforce which has the potential to slow development. On the other hand, the effect of new initiatives should continue to push up building levels. The next few years would certainly be a promising time to see new build homes rising to pre-2008 levels.

If you are looking for a new home or would like more information on how new build homes affect the property market, call Garrington today to find out how we can help. 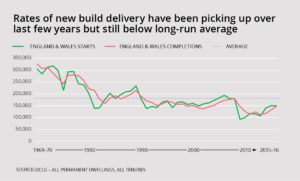