You might think that the difference between buying a new build vs buying a second hand home is just personal preference. Some people like flashy modernity, others like a home that has stood the test of time. But we’re going to be looking at some data that shows there is a real difference in the market. One of the above options commands a premium, but why?

You can see the full breakdown in the chart but here it is: overall, there’s a 29% premium for new build vs buying a second hand home. That means people are on average paying 29% more for a new build than on average house prices.

On closer inspection though that big extra percentage is almost entirely made up of new build flats – which command a massive 63.3% premium.

But what about other properties? Actually, there’s little difference there. The other property types pretty much average each other out when it comes to a new build vs second hand home. Detached properties are at a negative, -11.7%. This is almost entirely offset by +11% on terraces. Semi-detached showing no difference between new build vs second hand.

Because prices follow demand we can see that the most in-demand new builds are flats and the least appealing new build option is the detached house. But why?

Why no premium for detached new builds vs second hand?

Detached new builds are looking unloved in these statistics. People are actually paying 11% less for a new build detached house than they would pay for a second hand detached house.

A new build regularly means a separate development and a new community. These new developments can lack not only a community but easy amenities such as shops and healthcare. Sometimes transport and school places are still a work in progress when new builds come on the market.

When you think about the kinds of people who buy detached houses – they will more likely to be family homes with children and more people living there. So these things become issues. It’s worth paying more for a second hand detached home in an established, mature community, with the extra outdoor space and larger home.

Why such a massive premium for new build flats vs buying a second hand home?

It’s the complete opposite when it comes to flats. Second hand flats in older properties don’t tend to be at the same high quality and standard of new builds. That’s true even on older purpose-built flats. And I’m sure we’ve all seen some truly horrible house-to-flat conversions with bad layouts and poor quality that can have ongoing maintenance issues.

New build – purpose built – flats are, as a general rule, going to be a better quality with better amenities than existing flats. They may or may not be larger in size but certainly compared to converted flats they are more likely to have a better layout. So much so that they might feel bigger even if they aren’t.

A factor not to be scoffed at is that architectural fashions have changed faster on flats than with houses. Many apartment blocks even from the 90s look and feel monstrously old-fashioned nowadays. Anything built before the turn of the century certainly wasn’t thinking about all your mod cons like wifi signal strength, USB wall sockets or how easily your online grocery shop was going to be delivered.

Even though these particular statistics are about buyers it can be interesting and applicable to renters too. Looking at how and why buyers pay a premium on new build vs buying a second hand home will give clues about what tenants want too.

Is buying a new build vs buying a second hand home that clear cut?

Perhaps nothing is ever that straightforward. There are challenges in the data. It is hard to compare like with like. It is impossible to completely separate all the different factors.

You’d have to have an identical second hand home and an identical new build right next door to each other, then work out which people would pay more for. Maybe if all things were equal there would be no difference in what people are willing to pay.

It’s also worth noting that the premium for new build vs buying a second hand home tends to increase in a strong market. Developers are building more new builds because they know they can make the money on them and housing is in high demand.

It’s a super interesting trend to watch though, for what it reveals about our buying intentions and buyer mindsets. It’s obvious that the new build quality in flats is in serious demand from buyers. Equally, at the other end of the spectrum, there are other factors that make second hand detached homes more valuable.

If you are looking for a new home and unsure about buying a new build vs buying a second hand home, call Garrington for more information. 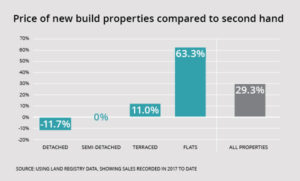