It’s forecast that by 2039 there will be 5.3 million new households in the UK, placing incredible demand on the housing market. You might think you can guess who those households are, but you are probably wrong. Three quarters of those new households will be headed by an over 65 (those most likely to downsize their home for retirement purposes).

There are statistics to show that half of those aged 60 and over would like to downsize. As many of them are currently in under-occupied larger family homes that would release a large amount of housing and make it available to the strained market.

So why are people not downsizing?

This is the dilemma for those looking to downsize and move homes: there are very few suitable properties to move to.

Of all current housing stock only 2% is designated as retirement housing. Only 1% of retirement-age Britons live in this housing. It’s not a situation that looks likely to improve any time soon: in the 1980s there were 30,000 units being built each year, now it is just 8,000 units.

The current scenario is far from ideal. Keep in mind the direction this is trending and what it might look like in 2039 with all those new households that are being predicted. The next twenty-two years will need reverse the decline of the previous decades – bear in mind that 2039 is much closer than 1980.

There is also a new opportunity in this retirement housing that is required. Today’s

over-65s are fitter, healthier and more active than previous generations. They are independent and a sizable portion have eldercare responsibilities and/or a growing role in looking after grandchildren. They have enjoyed a high quality of life and all the benefits of modern technology.

The impact of a rising life expectancy

The number of 65+ people is increasing not only because of the post-war Baby Boom effect and the aging of an already large demographic but by rising life expectancy. Many of these 65 year olds could be looking at thirty or more years of retirement, presenting another shift in the demands on retirement housing. As you can see from the accompanying infographic, there are significant increases at each level of 65+, 75+ and 85+ households.

This presents a unique set of challenges. Creating communities and designing housing for this growing generation will be a complex task and one that will open the downsizing bottle neck and ripple across the rest of the housing market.

If you would like further information regarding your property decision in retirement and how Garrington can help you overcome the challenge of selling your current home and finding a new home, contact us today for a free no obligation meeting. 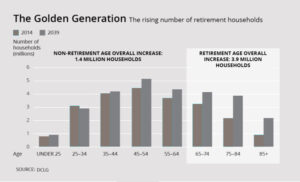