Let’s get a bit philosophical for a moment. What is happiness? How can we be happy? It’s important for our health, wellbeing, the economy and politics.

According to the Office for National Statistics, the happiest people in the UK live in Na h-Eileanan Siar, the Western Isles in the Outer Hebrides in Scotland. They scored their happiness at 8.24 out of 10, compared to a national average of 7.48.

The survey was introduced in 2011 by then-prime minister David Cameron, wanting to track not only economic and political data but quality of life. And it’s been good news: the average happiness level has been rising. There are many aspects of life tracked on the survey, including the environment, relationships, health, jobs, education, personal well-being, governance, the economy, personal finances and where we live.

The chart shows the regional average compared to the national average, as well as the highest scoring local authority. So while Na h-Eileanan Siar has the highest score, Scotland as a whole is slightly below the average. The happiest region is Northern Ireland, in particular Mid and East Antrim, the local area coming second. Third place, and the happiest place in England is the Newark and Sherwood area in the East Midlands.

In contrast, people living in London score lower than the average on all areas of the survey, though Redbridge in London does come tenth.

What makes the happiest places to live so happy?

How much do you think where we live can affect our happiness?

The section of the survey on where we live takes in crimes against another person, safe walking after dark, accessed natural environment, neighbourhood belonging, transport access to services and satisfaction with accommodation. So there’s a whole range of factors at play in how where we live affects our personal well-being and what might contribute towards the happiest places to live.

There is also an international World Happiness Report – in which the UK comes 19th, with a 6.7 score. That chart is topped by Norway, with 7.5, and the five Scandinavian countries make up half of the top 10 happiest places to live in the world.

It’s perhaps no coincidence that the UK-happiest Na h-Eileanan Siar is seeing some of the strongest rates of house price growth. But the small sample size makes it difficult to definitely say.

What else might make somewhere the happiest place to live?

Really compelling data has been collected on the house prices by urban or rural classification, suggesting that a balance of both urban and rural areas commands the highest premiums. Could this be linked to the happiest places to live too?

Where we live – not just the house, but the area – has huge potential to affect our quality of life and happiness. Being close to family, the amenities we like and use regularly, good schools, length of commute, the community and atmosphere, can be just as important as the size and style of a house.

Nationally, the time we spend commuting is rising with 3.7 million people commuting for more than 2 hours a day and an average commute in 2015 of 57 minutes. It’s just one example of the many factors influencing where we live, how we live, and how that can affect our personal well-being. The happiest places to live can be the happiest for entirely personal and unique reasons.

If you are looking to relocate to a new area and are interested in how all these factors might influence your choices, Garrington consultants have unparalleled specialist knowledge of their local property market, so call us today. 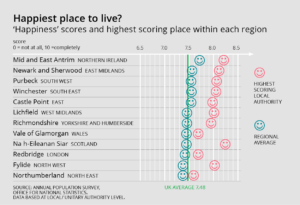