Home Property News Where is there high house price growth in the UK?

First off, to Salford. Salford is the UK’s booming new business hotspot with yearly growth of 85% and 1,393 new businesses opening in the first three months of 2017. It’s expected Salford will have 5,200 new businesses by the end of the year.

It looks like the question of “where is there high house price growth in the UK?” can be answered with: where there are high numbers of startups and business growth.

Why Salford for high house price growth and business growth?

The North West is leading the way for regional economic growth and we looked at how cultural institutions such as the BBC moving to Salford have had an impact.

Startups in TV and media can open near an already-established presence in the industry with the BBC and ITV. Technology companies and other entertainment companies such as video games have followed. Investment in business clusters, co-working and startup initiatives along with redevelopment and wider cultural work has given the area a more vibrant appeal.

House price growth has been achievable coming off starting prices lower than the UK average. Nearby Manchester has the fifth most expensive rental market in the UK and Manchester has previously been in the top cities for startups, largely in the ‘professional, scientific and technical’ field.

The Northern Powerhouse effect is not only helping industry but having a knock-on effect to high house price growth.

Where else is there high house price growth in the UK?

Leicester was mentioned in a CBI productivity study as a city with high productivity growth potential, citing a 14% improvement in productivity if journey times into the city from surrounding areas could be shortened.

The city’s “cultural quarter” investment and redevelopment included many provisions for new businesses including the Leicester Creative Business Depot and Maker’s Yard. The two universities provide innovation centres and a co-working space is due to open in 2018. House prices have grown in the city by 11% in the last year.

If you are wondering where there is high house price growth in the UK, and what other factors could be affecting it, as well as how that might affect buying or renting a home, speak to Garrington for more information. 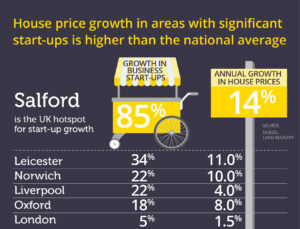