Home Property News Help To Buy: How it is boosting the new homes market

It’s been estimated that 48% of all new build properties were bought with the Help to Buy equity loan scheme in the first quarter of 2017. That proportion has been rising steadily and the scheme has helped over 120,000 buyers since its introduction in April 2013.

It is one of a number of schemes aimed at boosting home ownership and the construction industry. But there were rumours it may be brought to a premature end. The press reported that the government had asked for a review of the scheme from the London School of Economics, which some people thought was a bad sign.

However, the Department for Communities and Local Government issued a statement saying, “We remain committed to the Help to Buy equity loan scheme to 2021, ensuring it continues to support home buyers and stimulate housing supply.”

How the new homes market has grown with Help to Buy

So, what is Help to Buy? The Help to Buy equity scheme works by the government providing a loan of up to 20% on a new build property costing under £600,000. The loan is free for the first five years. The buyer then needs only a 5% deposit and 75% mortgage. In February 2016 the loan was extended up to 40% for new build properties in London.

The accompanying graph shows the proportion of new build homes bought through the scheme. You can see how it had remained more or less level for some time. Then there was a rise in the previous two quarters and it is now at nearly half of all new build property sales.

With over 120,000 people having bought through the scheme and at the proportions seen in the graph, it is clear Help to Buy has been significant for the industry and that it will continue to boost the new homes market over the next few years.

The statement from the DCLG acknowledged the impact the scheme had made and added that, “The government also recognise the need to create certainty for prospective home owners and developers beyond 2021, so will work with the sector to consider the future of the scheme.”

That will come as a relief and reassurance for new build developers, who have become ever-more reliant on Help to Buy. There is still the possibility of changes to the scheme post-2021, such as a reduction in the price threshold.

We’ve seen the variation between new build flats and new build houses over the years and discussed what factors might be at play there. We’ve also seen that] new build flats attract a premium over second hand flats rather than houses, which no doubt is a big factor. If the threshold is reduced could it mean a swing back towards flats?

It’s going to be even more influential if Help to Buy continues to become a higher percentage of all new build sales. The new homes market could come to rely on it for more than half of all sales. It might continue to rise again in the next few quarters as it has done in the past, taking it past the 50% mark.

At this point, developers will already be looking to 2021 as a completion date. So they –and the rest of the industry – will be wondering what the Help to Buy options might look like after that date and how it will boost the new homes market in years to come.

If you are looking at your options for buying a new build home and Help to Buy, speak to Garrington today. 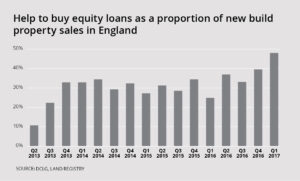