Are you curious about how many people live without a mortgage on their home?

There are now more people owning a home vs having a mortgage – 52% of owner-occupiers own their property outright according to data from the English Housing Survey.

Here’s everything you need to know about owning a home vs having a mortgage.

At the same time as mortgage-free home ownership is increasing the average length of time people stay in a home has gone up too. The overall average for homeowners is 17.8 years. Looking just at outright owners that shoots up to an average of 24 years, which is almost at the standard 25 year mortgage term.

Plus, demographics could be playing a large part in why more people are owning a home vs having a mortgage. With a large population of baby boomers all reaching pensionable age they are paying off their mortgages with pension lump sums or downsizing for retirement; by selling a large family home and paying cash for a smaller property.

It’s been ten years since the interest rate was last put up and rates have plummeted to the current 0.25% in that time. Savvy homeowners found that switching to a favourable rate and paying the difference off the capital is a better investment than a savings account.

Boosting monthly mortgage payments will have also been a tactic helping people pay off their mortgage earlier than anticipated, thus joining the ranks of outright owners

…vs having a mortgage

It makes sense why there are more and more people owning a home vs having a mortgage on it. Still, the number that do have a mortgage is not small.

Looking at the chart, 48% of homeowners have a mortgage though the data doesn’t show how the mortgage stands. It could be that many are nearly paid off and that is transitioning an increasing number of people to being outright owners.

Because of the low interest rates borrowing for a mortgage has been cheap and first time buyer mortgages are increasing, making up some of the numbers for the mortgage side of things.

Owning a home versus having a mortgage for first time buyers

The survey shows a slight increase in the numbers of homeowners to 64% – the first increase since 2003. It could be a temporary blip or just indicate a small difference in the survey sample, but the next few years could start to show a trend.

If it is a genuine uplift in home ownership the rise in first time buyer mortgages also shows that government initiatives to boost home ownership are beginning to pay off.

Home ownership is coming later in life for first time buyers. The average age is now in the early thirties. Mortgage terms are growing in length too. It’s not unusual to see 35 year terms in order to keep monthly payments down. How might this affect owning a home vs having a mortgage in the future?

Owning vs having a mortgage on additional homes

Second homes are also becoming more popular despite attracting extra stamp duty charges. There isn’t any exact data for how these are financed but it is believed many additional homes are financed outright by re-mortgaging the primary home, with some cash buyers as well.

If you are looking to buy a home and aren’t sure about owning a home vs having a mortgage, call Garrington for more information. 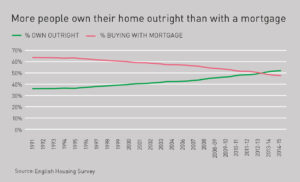