If you are doing your “how much do I have to earn to afford to rent…” calculations on the back of a napkin you will be relieved to hear we have the definitive answers to all your questions.

There’s normally a strong link between rent and earnings. At the moment, rents and wages are rising at almost the same rate, according to the Office for National Statistics, so how will this affect how much you need to earn to afford to rent?

It tends to be the case that wages dictate rental growth, either curbing or allowing what people can afford to rent. However, with the inflation pressures this year, wages have fallen in real terms, by 0.6% in the first quarter of 2017. So, it looks likely that rental price rises will start to be restricted.

Private sector rents rose by 1.8% in the last year, and average wages grew by 1.7%. In the long term that close match is generally the case. But as you can imagine, since the economic crisis in 2008 there have been significant fluctuations. Immediately after the global financial crisis average wages were leading growth in rents. After 2012 rental growth led the way with increases of 2.2% versus wage growth of 1.7%.

HomeLet estimates that private rental households on average spend 29% of its monthly income on rent. The Office for National Statistics has that at a higher level: 35% in 2015-16, compared to 34.3% in 2012-13. Anyone renting will agree, it’s a lot.

The Rental Affordability Index 2017 compares 72 cities worldwide, 33 London boroughs and 15 cities across the UK. It shows the price per square metre of renting, the average monthly rents for single people or families and the necessary incomes for those rents.

Let’s look at some of the popular choices and ask, how much do I have to earn to afford to rent in some of the UK’s big cities?

How much do I have to earn to afford to rent in London?

No surprise: London is by far and away the most expensive city to rent in across the UK. In fact, on a worldwide stage London is ahead of Miami, Tokyo, Paris and Melbourne, only very slightly behind Los Angeles in terms of cost.

London is nearly twice as expensive as the second-placed Edinburgh with rents of £24.71 per square metre. Single people need to earn £39,867 a year to afford to rent at a price of £963. For families the likely rent is just over £1800 a month, to afford to rent the household income must be £75,000.

Within London – again, no surprise – the most expensive borough is Kensington and Chelsea with a necessary family income of £221,000 to support rents of £72.40 per square metre. The cheapest London borough, Bexley, is still more expensive than Edinburgh. In fact, if the index were broken down by local authority the top 33 most expensive spots would all be in London.

London and Edinburgh are followed by Bristol and Southampton. These four cities all make it onto the top fifty list of the world’s most expensive cities in which to rent.

By contrast, if you fancied a bit of a change, you could live in the capital of the world’s happiest country – Oslo in Norway – at £17.39 per square metre. It comes in 20th most expensive on the world stage. The happiest places to live in the UK don’t have much overlap with the most expensive.

How much do I have to earn to afford to rent in Manchester?

Manchester, at number five in the UK charts, is the first northern English city to be featured. With a booming cultural scene and high levels of investment the Salford area is the fastest growing hub for UK startups. The North West is showing regional economic growth at the highest level in the UK.

How much do I have to earn to afford to rent in other areas of the UK?

Cardiff is the seventh most expensive city in the UK though no other Welsh cities make the list. The Midlands don’t appear until Nottingham in 9th, ahead of Birmingham in 11th. Belfast is fifteenth with a per square metre cost of £6.29. Compared to the £24.71 in London that started the list that is a drop of £18.42 within just 15 cities.

It all shows a huge variation in how much you have to earn to afford to rent across the UK. For specialist advice on all these areas, for renting or buying, contact Garrington. 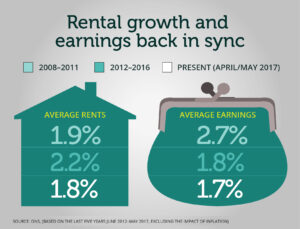